The small, out-of-the-way, carved-out-of-rock Cripta del Crocefisso contains amazing frescoes and echoes of Byzantine culture. Located in a field, to the side of a two-lane road, the building looks as if it might be a farmer’s old stone storage shed. The devotional space is accessible through a northern door that requires a bit of stooping to get into. Once inside, barrel-vaulted staircase leads to the underground room. Visits to the Cripta are by reservation, which isn’t that difficult but speaking Italian helps.  It’s best to contact the Ugento Archeological Museum a day before you would like to see the wall paintings.

For the past handful of years, I have been tracking down Byzantine frescoes in Salento region, with the intention of making monotypes of the images. In a way, it was no surprise to see examples of the patterns of Byzantine art I saw in the Ugento underground chapel; it is art typical to other religious structures in Salento that were built between between the 13th and 14th century. What was really enchanting was the ceiling. Oh my! The ceiling is certainly ‘far-out,’ spectacular and got my mind to imagine the experiences–devotional, celebratory, visionary, as well as to hear whispers of the prayers, wishes, and dreams–that might have been realized in that space. 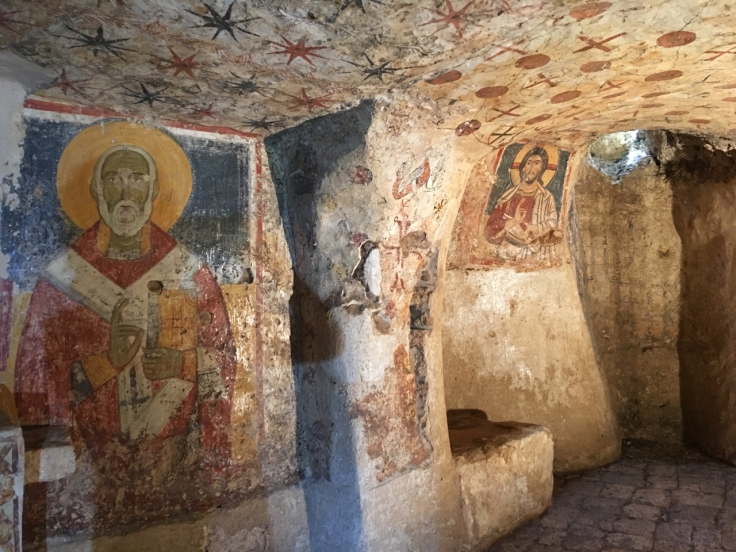 Once you’ve made your way down the steps, you can’t but help to notice the low ceiling above your head. The ceiling is covered with paintings of Crusaders’ shields–alternating shields painted with the black cross symbol of the Teutonic Knights and shields with the red cross symbol of the Templar Knights. Also painted on the ceilings are stars, plant motifs, and real and imaginary animals, such as a Gryphon and a large Hydra from Greek mythology (probably to ward off evil).

For centuries, the crypt was used as a place of worship for the people living in the small stony village that surrounds it. Records indicate human presence in the surrounding area from at least from the fourth century B.C. Cripta del Crocefisso is located on the Via Sallentina, a route of the Messapian and Roman ages that connected Otranto to Taranto. 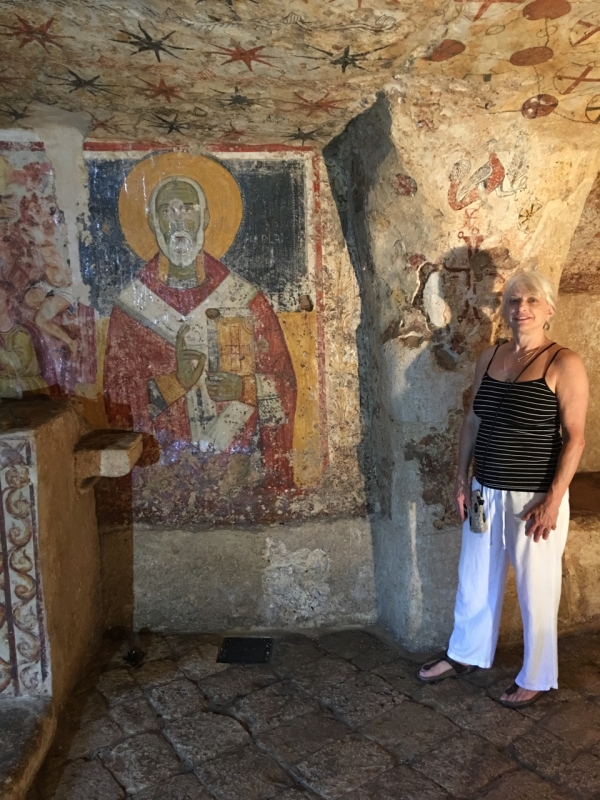