Satisfied n’ Tickled Too at The Taj Mahal

It felt like walking over the surface of a postcard or being folded inside the interior of a book. The experience was out-of-body in the way that the visuals were extraordinarily familiar yet illusatory.  The combination of the precise symmetry, cool whiteness, pristine smoothness and outright beauty created a crack in the ordinary that transported my mind beyond the body, beyond time.

The domed monument was built by the Mogul Emperor Shah Jahan between 1632 and 1654 for his favorite wife, Mumtaz Mahal, who died in childbirth in 1631. (Same time period Colonial America was getting organized.) It houses their graves and a mosque, as well as several other graves of Mogul royalty.

Anjula and I arrived in an electric shuttle. Vehicles are banned from within 500 meters of the monument, because diesel and fossil fuels have changed the color of the Taj Majah.  LED displays on the grounds give a running count of air pollution.  I decided to share the problems of preserving the Taj Mahal here on my blog because the threat is a microcosm of what our planet, and our bodies, are encountering in the 21st Century as industrialization and lax regulations march on.

Taj Mahal is located in Agra, a bustling manufacturing center in the populous and poor northern Indian state of Uttar Pradesh.  Results of tests by Indian engineers indicate the light-absorbing dust, black carbon and the brown carbon generated from the combustion of fossil fuels and biomass are  responsible for the continuing discoloration of the white marble.

Water tables and pollution from the Yamuna River, which runs alongside the structure are much lower than they were when it was built and there is a serious risk that the whole construction will be destabilized since its foundations are made of wood and need to be kept moist to avoid subsiding. 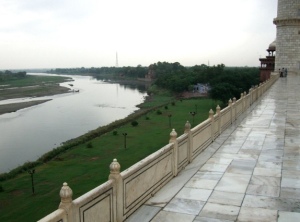 Water from the Yamuna river, which flows right behind the Taj, is heavily contaminated by chemical and human waste. In Agra, untreated sewage and solid waste is discharged directly into the river, while the upstream barrage from Dehli has dramatically reduced its flow.

The awareness of the pollution has encouraged the country to mitigate the threat. India is building a natural gas pipeline to supply clean fuel to industries in Agra, widening streets, constructing a bypass, replacing diesel-run rickshaws with cleaner vehicles, heavy investing in a refinery to reduce emissions and improve power supply that means less reliance on dirty diesel generators.

One time NOT to visit is on Friday, when the Taj Mahal is closed