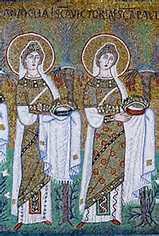 I am in Rome, at THE AMERICAN ACADEMY IN ROME, making art and doing  research on Santa Vittoria, a Late Antiquity Noble Roman woman who was martyred in 250 AD. She has a present-day cult following in Abruzzi region of Italy.

I will be going to Abruzzi, at the end of the month to visit the place where she was supposedly killed and also the town where her remains were moved to in the 9th Century.

My art making here in my Rome studio revolves around the idea of this saint (pierced heart, virginity, cutting loose from social constraints, getting rid of jewelry and fancy clothing). My research is about who she  might have been & if she really existed. I will be blogging about what I find out about her and about hagiography, the study of saints.

Hagiography, according to  is Claude Lévi-Strauss, a French anthropologist, psychologist and philosopher,  is like anthropolgy in that its models are on a mechanical not statistical scale, and that the unconscious model is of great significance.

The richness of the unconscious, explains why scholars using traditional critical methods have found themselves at a loss when regarding hagiography of early saints because  anchors–TIME and SPACE– disappear.

Take my saint for instance: the SPACE that contained her life disappeared.  She was born in about 230 AD to a noble roman family.  Shortly after, or before her marriage, she broke free of the urban environment in Rome and went to live in a wild, rural area. Historical data at the time was confined to urban spaces, plus no one really wrote about women in 250 AD. When Vittoria left Rome, she left the economic and social criteria of the city as well. Her repudiation of secular civic life marked the beginning of her ascetic life.

Historians use linear, irreversible TIME, expressed in points of reference recognized by the community. Hagiography seems at first sight to employ historical time.  It references names of emporerors, generals, etc.  However, these facts are organized according to internal requirements to the writer, or storyteller at the time of telling the story. Hagiography provides a timeless acount of the passage of humans, beyond the human condition,  in the reversible time of myths. Authors of early Christian saint lives place their account in some far-off moment that serves a purpose.

Most events happened long before the hagiographer was writing about S. Vittoria.