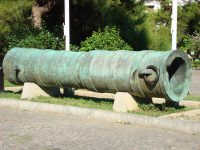 After casting the cannonballs from the Ottoman siege of Otranto, I painted the inside of the casts white and rimmed the edges with red.   For the upcoming SILENT. SILENCE. SILENCED. EXHIBIT at Atlantic Works gallery, the cannonballs will be suspended from the ceiling….as if raining down ton the visitors.

MORE ABOUT THE CANNONBALLS

The bombardment of Otranto, Italy, followed the capture of Constantinople in 1453 by twenty-seven years. Using the same weaponry, the Ottomans pulled into Otranto harbor with a fleet of 120 ships, 28 galleys, and 20,000 infantry.

No one else had gunpowder at the time. It was impossible for the Otrantini to seek safe shelter behind the walls of a 100-year old castle. Cannonballs rained from the sky for 15 days.

The bombards, cast from bronze, could hurl the huge stone balls, weighing up to 1,500 pounds, several miles. After one shot, the barrel had to be cooled in oil to be fired again. The cooling process took over two hour and was frustratingly slow.