On The Mohawk Trail. Love. Love. Love. Other people. Your fate. Your obstacles. Love it all. Because it’s the only way. 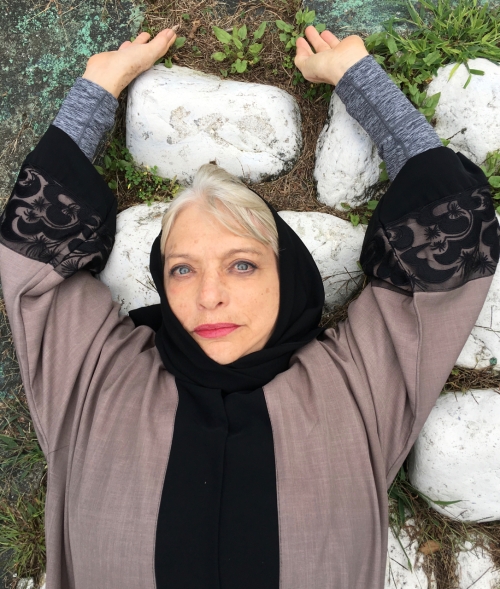 My husband and I were on our way back to Boston on Route 2, and traveling on the Berkshire part of the road called The Mohawk Trail. I thought to stop at the next teepee shop for a photo shoot in the abaya. (The Mohawk Trail is  an automotive-age incarnation of an ancient Native American footpath between the Hudson and Connecticut River valleys and is dotted with shops 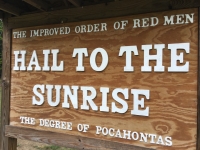 selling trinkets as well as maple syrup.) What came up next on the road wasn’t a teepee but a The Sunrise Park, a roadside park  with a monument featuring a statue of a Mohawk Indian in traditional wardrobe looking eastward with his arms extended. He faces the direction of the rising sun and is said to be greeting the Great Spirit. 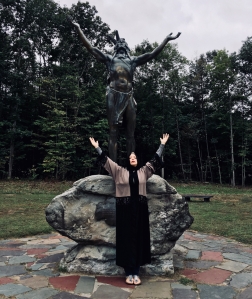 Wonderful, I thought. My experience as an artist in abaya serves as a way into a topic or question about the human experience, about identity and what it means.  I am wearing a garment, that identifies me as a woman who is most likely Muslim–just like the statues’s garment in Hail to Sunrise Park identified him as most likely an Native American Indian.  Artistic narratives can be developed from history– which is what I intended to do.

First–in this time of conflict in our nation– I wanted to pay tribute to Native Americans and America, juxtapositioning  the images of two Americans–a Native American and a woman in abaya. Second, I wondered if the doubled up image might make viewers uncomfortable.  However, third, if it did make people uncomfortable, it is in the interest of the common good for people to look and to question their reaction, because the image asks questions about the visible body and identity that all people have to think about–what and who is my body and what it means.

Poking around later on my cell phone, I found out that The Sunrise Park was built by “The Improved Order of Red Men,”  a fraternal organization of white men who dressed up in the regalia of Native Americans, perform rituals based on Native American rituals, use Indian language, and have meetings in teepees. (Some of the famous members of  this club include George Washington, Paul Revere, Teddy Roosevelt and Franklin Roosevelt) “The Degree of Pocahontas” is the female auxiliary of the club. The clubs are active to this day and are headquartered in Waco, Texas. The organization’s mission statement says they are devoted to inspire greater love for the USA and the principles of American liberty.  On their website I read the organization raises money to fight communism 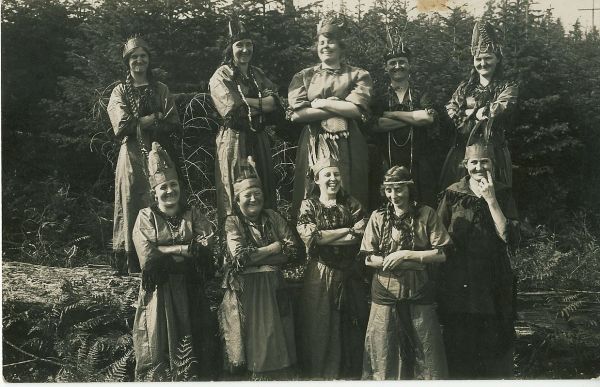 The “The Improved Order of Red Men” and “The Degree of Pocahontas” trace their origins back to the Boston Tea Party.  In 1773 when white colonists disguised themselves as “their idea of Mohawk people” and proceeded to Boston Harbor where they dumped 342 chests of English tea into the sea.

Going back to the topic or question about the human experience, about identity, history, and what it means I wondered what our Founding Fathers and modern-era men and women–when they dressed up as Native Americans–felt: were they masquerading, paying tribute, or experiencing and honoring Native American life.

Then a bizarre thing happened: Just as my husband and I were getting in our car to leave, another couple stopped to do a photo shoot–and in a disguise, perhaps?  A thin man and woman with long grey-brown hair stepped out of a white van. She wore a long blue cape with two wings; one side wrapped and  flung over her shoulder, the other floating down her back. On her feet were lace-up brown suede moccasin boots with fringe. She wore leggings and wire rimmed glasses and carried a long wooden flute. Her companion had an iPad.  He was taking the pictures.   I asked her if she might want to take a picture with me. The man backed away and wanted nothing to do with a person wearing an abaya. “No. No. No.” he said.  The woman wanted more information; what my themes. I told her identity, meaning, and the physical body.  She said she was into a Native American theme.  “But I’m really just an American.”  It ended up she didn’t want a photo with me. “I just don’t have an extra three-minutes,” she said. “I have to get back to New Hampshire. You can look me up on my website.” She gave me the name of her website.